Adrienne Basso's NATURE OF THE BEAST

Adrienne Basso's NATURE OF THE BEAST

In this captivating new collection from Hannah Howell, Adrienne Basso, and Eve Silver, three women meet the irresistible vampires who are their destiny - and discover a passion satisfied only by complete surrender... 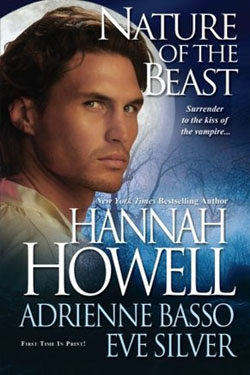 "Dark Hero" by Hannah Howell. Unlike most of his clan, Berawald MacNachton chooses to live in comfortable seclusion, far from the enemies who hunt his kind - until Evanna Massey and her young brother intrude upon his solitude...

"Bride of the Beast" by Adrienne Basso. When Haydn of Gwynedd first met Bethan of Lampeter, she was a brave and fearless young girl, risking her life to save his. Now Bethan has grown into a striking, courageous woman who needs Haydn's help to defeat her tyrannical stepfather. Haydn's dark gift compels him to offer marriage in name only, but he cannot deny the passion that sears them both...

"Kiss of the Vampire" by Eve Silver. Devoted to her work at King's College Hospital, Sarah Lowell is shocked to discover that someone - or something - is killing the weakest patients, draining them of their blood. Killian Thayne, an enigmatic surgeon, offers Sarah his protection, but his sensual, commanding presence presents another kind of danger...

From: Bride of the Beast

"Cease your struggles at once or else you shall wake my guards."

The voice that spoke was low and arrogant. Bethan winced and tried to calm herself, knowing this must be the man she sought. She remained perfectly still and he removed his hand from her face. But the other arm, strong as steel, remained around her waist.

Bethan could barely breathe, was terrified of moving. Yet slowly she turned and looked up at her captor, straining to see the features hidden within the hooded cowl of the man's mantle, but it was too dark.

"Who are you?" he demanded.

His tone was menacing and angry. The panic tightened in her breast. Bethan tried to summon a smile, but her lips trembled so forcefully she knew the effort was a failure.

Stay calm. Keep your wits. "I am Bethan of Lampeter. My men and I arrived yesterday afternoon."

"There are no guest chambers in this section of the castle. What were you doing here?"

A rumble of displeasure rose from deep within his chest. "Well, now you have seen me. I bid you good night, my lady."

He released his grip and turned to leave. Bethan felt despair tear at her soul. "Wait! Please, I must speak with you on a matter of grave importance. Is there somewhere private we may converse?"

He shifted and his hood fell from his head, revealing his face. Bethan was almost afraid to look, worried he might be hideously scarred or disfigured. But her fears were unfounded. The Warrior of the North was an uncommonly handsome man. Black hair, silky thick and straight, hung to his shoulders. The arch of his brow was noble, his cheeks chiseled, his jaw square and strong and perfectly symmetrical. His eyes were pale and silver, alert and intelligent.

For one brief, fanciful instant she thought there was something familiar about him, but knew that was impossible.

"There is but one reason for a woman to come to a man's chambers in the middle of the night."

"I just want to talk," she muttered.

"That's what they all say." A menacing smirk quirked one corner of his mouth. "Come."

Bethan stared at him, sensing it could be dangerous to trust him, yet all the while knowing he was likely her only hope of defeating her stepfather. Her breath rasped out of her lungs in thin puffs. She swallowed hard, her courage dwindling for a moment. Then burying deep the fear that choked her throat and robbed her of speech, Bethan held out her hand and let the volatile stranger lead her away.