Adrienne Basso's HOW TO SEDUCE A SINNER

Adrienne Basso's HOW TO SEDUCE A SINNER 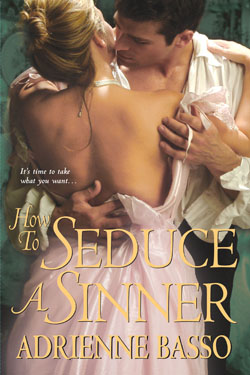 Dorothea Ellingham is waiting for the man who can ignite a spark of consuming passion with just a kiss. For when that happens, she'll know she's found the one. But after three suitors miserably fail her test, she's about to lose all hope until she lays eyes on Carter Grayson, Marquess of Atwood. His devilish good looks and charm send her pulse racing--and when he kisses her, she finally finds what she's been craving. . .

Carter Grayson is in no hurry to wed. But when he meets Dorothea, he's captivated by the urgent need she sets off in him. Knowing he must have her, he proposes. But as they soon discover, a union forged on passion alone is never enough--and explosive desires can often lead to love. . .

The subtle scent of lavender assaulted his senses. Carter turned. Marvelous! A young woman stood on his left, mere steps away. He wiped his annoyance from his face and offered her a smile. "Good evening." He bowed. "I am the Marquess of Atwood."

"Yes, I know." The young woman seemed taken aback by his forward manner, but she nodded her head cordially. "We met at Lord Willingford's ball a few weeks ago. How are you, my lord?"

"Longing to dance. Won't you please indulge me fair lady?"

Without waiting for her to answer, Carter swept her into his arms. Mercifully, a section of the ballroom had been cleared for the dancing couples. He took immediate advantage and hastened toward the center, as far away from his father and Lady Audrey as he could get.

The woman in his arms let out a muffled sound of protest, but he ignored it, pulling her along with him. She was small in stature, barely reaching his shoulder. She was also very pretty, with delicate, fine-boned features, silky blond hair, and a slender, willowy figure that boasted high, firm breasts. There was something vaguely familiar about her...

Carter narrowed his eyes and studied her further, then nearly missed a step of the waltz when he realized her identity. Good Lord! It was the female from the garden, Arthur Pengrove's newly acquired fiancée. 'Twas no wonder she was glaring at him with obvious disapproval. No doubt this dance had been saved for her intended.

Oh, well. There would be other dances for her to share with Pengrove. A lifetime of them. For now his need was greater and besides their dance had already begun. Actually, it was a good sign. His luck must be changing.

His even mood restored, Carter smiled down at his partner. "I have recently arrived at the ball. Tell me, has anything of great interest occurred?"

He expected her to blush and stammer and then gush about her very recent engagement to Arthur Pengrove. He would nod and smile and listen to her subsequent chatter, thus alleviating the burden of conversation. In fact, if he were very fortunate, he could lead her to the opposite side of the room and at the end of the dance, slip quietly from the ballroom. Without seeing his father. Or meeting Lady Audrey.

But the very pretty future Mrs. Pengrove did not reveal the secret of her engagement, nor even hint that the momentous event had taken place. Instead, she gazed at him with a boldness that was nearly disconcerting.

Carter's eyes moved down her face, settling on her lips. She had an especially sensual mouth. His pulse quickened and he was suddenly assaulted with a fierce urge to kiss her. Pure lust, of course. Still, it seemed a pity that it would be Pengrove who enjoyed the taste of those lush, tempting lips.

"Why did you ask me to dance? Or rather, why did you pull me against my will onto the ballroom floor? Your haste was most extraordinary. Are you running from the law, perchance?"

Carter arched his brow. He could not possibly have heard her correctly. "Pardon?"

"I asked why you insisted that I dance with you," she replied calmly.

For a moment, Carter's mind when blank. Her forthright manner caught him very much unawares. Females generally blushed and stammered in his presence or else sent him sly, seductive glances. They never challenged him so directly.

"I was overcome by your beauty, fair lady," he said, deciding to disarm her with some harmless flattery. "It drove me to bold madness."

"What a bunch of rot. You barely glanced at my face before carting me away like a sack of grain."

Carter's brow raised as he feigned indignity. "I am the Marquess of Atwood, my good woman. I do not cart females away. I gracefully, elegantly sweep them away."

"Do you really? Even when they have promised the dance to another gentleman?"

Ah, it was as he suspected. She was piqued because he had stolen her away from her intended. "Your previous partner will have a lifetime to enjoy your dances. 'Tis only fair he give others a chance, dear lady."

She tipped her head to one side. "You don't know my name, do you?"

Caught! Carter bestowed his most charming, heart-melting smile on her, hoping to distract her question. But it didn't seem to work. Her gaze remained on him, solemn and intent. There was a long drawn-out silence.

"Of course I know who you are," he blustered.

"We met at the Willingford's ball. You are Arthur Pengrove's future bride. And I should like to add that he is one very lucky fellow."

Her blue eyes filled with shock and regret, then quickly returned to a mischievous gleam. It was such a brief expression of emotion that Carter would have missed it had he not been observing her so closely.

"You do not find that to be a particularly odd name, my lord? Arthur Pengrove's future bride? Please, try again."

A stark challenge, plain as day, was written all over her lovely face. Damn. He wished he really did know her name, just so he could win this game. But alas, he had no earthly idea. Which was another surprise. How could he have forgotten such an enchanting woman?

He cleared his throat, stalling for time. "How amusing. This is rather like that fairy tale about the odd little man, who helped the beautiful miller's daughter spin straw into gold. What was his name again?"

"You are avoiding the question."

"Am I? I admit my thoughts are jumbled. Consumed by the events in the fairy tale. And fascinated at the similarities to our current situation. Truly, your hair puts spun gold to shame."

She muttered something under her breath. A word that no lady should know, let alone speak. Carter smiled. "Pardon?" he queried, hoping to distract her.

Though he highly doubted it was her intention, she had successfully entertained him as no woman ever had. Outside of the bedchamber, of course. Females often grew tongue-tied around him, no doubt because they were eager to make a favorable impression.

He knew that was not the case with his mysterious beauty. If anything, she seemed most eager to get away from him, which caused him to like her even more. Her wit was sharp, her attitude bold. Her voice had a warm pitch he found oddly sensual. The sound of it sent an unexpected potent spark of desire right through him.

"You have a devious mind, my lord," she finally said.

"Precisely. Therefore I understand how they work."

She laughed. It was a joyful, melodious sound and Carter found himself joining her in a wide smile. It took a few seconds for him to realize that the music had stopped and the dance was over. Regretfully, he released her from the circle of his arms, then almost immediately felt the presence of another person standing near.

Carter turned, fully expecting to see her newly acquired fiancé, Arthur Pengrove. Instead, his eyes clashed with the Marquess of Dardington.

A rather angry, visibly annoyed, Marquess of Dardington.

Carter Grayson, the Marquess of Atwood, has just received an ultimatum from his father, the Duke of Hansborough: he must get married before the end of the season! The Duke even prepares a list of "suitable" wife candidates for Carter, but Carter is not ready to give up his rakish life for wedded bliss, especially because the only woman he would even consider marrying—Dorothea Ellingham—is already engaged. Carter decides to thwart his father’s plan by finding a totally unsuitable woman to wed, but he quickly changes gears once he discovers he is mistaken about Dorothea’s engaged status. Dorothea is more than ready to accept Carter’s proposal, but she quickly finds that a successful marriage needs more than just passion, it needs love. Basso’s skillful characterization, steamy sexual chemistry, and graceful writing give her latest Regency historical a splendidly satisfying sense of richness and depth.—John Charles, Booklist