Adrienne Basso's HOW TO BE A SCOTTISH MISTRESS

Adrienne Basso's HOW TO BE A SCOTTISH MISTRESS

"...utterly enchanting from the very first word. The characters are richly drawn and wholly alive in their illustration. I found myself drawn into the story, unable to put it down until the last word. It is a book that has earned a treasured spot on my shelf, and I have no doubt other readers will also feel the same."—Reviewer Top Pick - Night Owl Reviews 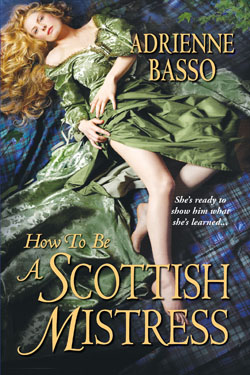 When newly widowed Lady Fiona Libourg flees to Scotland in need of protection, Lord Gavin McLendon is powerless to refuse the British beauty. Especially when she offers herself in exchange. Now the brooding Scottish warrior can think of nothing else but ravishing his delectable new mistress, even though he's dutybound to marry another. . .

Fiona is shocked when Gavin accepts her scandalous offer--and fretful at the thought that he will discover how little she knows of seduction. But when Gavin proves to be a skilled and achingly sensuous teacher, Fiona doesn't want their passionate arrangement to end. Now she can't help but wonder just what it would take to go from Scottish mistress. . .to Scottish wife.

“Hmmm.” The earl settled back in his chair. He didn’t seem entirely convinced, but at least he was still listening. “What do ye offer in return for my aid?”

Fiona’s heart leapt. “A half yield of our grain crops for three years.”

“Hunting rights in our northern most woods.”

Fiona nervously licked her lips. “Twenty bolts of our finest wool. The weavers of Arundel are known throughout the kingdom for their skill. You’ll find no finer material in all the land.”

The earl studied her for a moment. “As far as I can see, ye have neither crops, nor land, nor cloth. I’ll grant ye ‘tis rather clever offering things ye dinnae possess in exchange fer what you want, but only a fool would agree to such a bargain.”

Fiona could feel her heart beating harder than it ever had. “With your help, someday I will have it all again. And I shall keep my word and give you what we agreed upon.”

His expression grew quiet, contemplative. Fiona allowed herself to hope, making the earl’s next words all the more crushing.

“Someday is far away. Yet even if I were willing to wait, I must maintain that ye are offering nothing to make it worth my time and effort.”

Fiona stood stunned for a moment, struggling for words, her nails flexing deep into the cloth of her overskirt. “I appeal to your honor, my lord, to your sense of decency.”

“Sadly, ye are gravely misinformed as to my character.”

He is turning me away. Disappointment slammed into Fiona’s chest like a fist. She had expected the negotiations would be challenging, but had been confident a satisfactory solution would be found. But what use was compromise when the earl showed no interest at all in anything she offered?

There had to be something he wanted, something he would prize enough to strike a bargain with her. More often than not she had heard Henry say that every man had his price. What was the earl’s?

“There must be something, my lord,” Fiona’s voice trailed off, her pride keeping her shoulders straight, her head high.

And that’s when she saw it. A flash of passion glowing from the depths of his eyes. A gleam of male interest, a spark of masculine admiration. Sexual desire.

It startled her. Henry liked to tell her she was pretty and would often compliment her golden hair or fair complexion or green eyes. And she enjoyed hearing it. But those words were never spoken with overt desire. At first, she had been too young to realize there was a lack of physical intimacy in her marriage. By the time she learned that her marriage was different from most, it was no longer important.

Henry treated her with respect, showered her with kindness, favored her with devotion. One night, after drinking too much ale, he had confessed that his lack of physical attention toward her stemmed from always thinking of her as he first knew her. She had come to his castle as a child, and though she had grown to womanhood beneath his roof, he forever saw her as a young girl.

Gradually, Henry’s lack of passion had woven itself into Fiona’s mind, but the spark of interest in the earl’s eyes reminded her that she still had one weapon at her disposal, one move left to make.

Holding steady, Fiona forced herself to look at the earl’s handsome face. “You are very much mistaken when you say I have nothing to offer. There is one thing that is mine, wholly and completely-- – my person. And thus, in exchange for training my son, I offer myself to you.”

A deep, soulful hush fell over the hall, letting Fiona know that others had heard her remarks. But it was their lord’s reaction that mattered.

Slowly, the earl lifted his gaze to hers, his deep blue eyes burning into her own. Fiona swallowed hard. Embarrassment washed over her, along with a single ray of hope.

Clearly, he was not repulsed by the idea.

“’Tis a tempting offer, but I cannae marry ye, lass. I feel no great urgency to wed again, but when the time comes and I do take my next wife, she’ll be a Scottish lady, through and through.”

“I’d expect nothing less.” Fiona hardly knew how she was able to speak so calmly. She had known that a marriage between them was highly unlikely, yet her desperation had been so strong, she was willing to humble herself with the outrageous suggestion.

The earl stood, his posture dismissive. Oh, no. Crestfallen, Fiona’s heart sank and her breath quickened as her mind worked frantically, desperately searching for the words that would miraculously change his mind.

He would not marry her. It had been a rash, desperate suggestion. But there was no time to feel the sting of rejection. She must act.

Ignoring the voice that told her she was about to make an even bigger fool of herself, Fiona took a bold step forward. If the price she needed to pay to secure Spencer’s future was her own humiliation, then so be it.

“Clearly, you misheard, my lord. When I offered myself, I said naught about marriage, did I?”

Gavin McLendon is Fiona Libourg’s last hope. The secret alliance forged between Gavin and Fiona’s late husband, the Baron of Arundel, cost Fiona’s stepson, Spencer, his inheritance. Because no one in England will support Spencer’s claim to his father’s estate, Fiona travels to Scotland to convince Gavin to take up Spencer’s cause. While Fiona might not have a penny to her name, she does have one bargaining chip to use with Gavin: herself. In exchange for his help, Fiona agrees to become Gavin’s mistress only to discover she has no idea what kind of a deal she has really made. Basso colorfully captures the dangerous political turmoil going on in the Scottish borderlands during the fourteenth century while at the same time spinning a richly sensual romance that will have definite appeal for fans of Julie Garwood’s classic Scottish love stories or Roberta Gellis’ timeless medieval romances.—John Charles, Booklist

“Basso sets this heartwarming odd-couple romance in the highlands of 1306 Scotland… it's just a sweet, delightful progression from attraction to all-encompassing love.”—Publisher’s Weekly Reviews