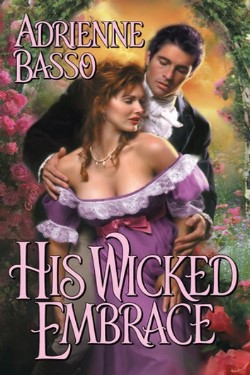 ONE KISS IS ALL IT TAKES

Damien St. Lawrence, the eighth Earl of Sanders, couldn't believe his eyes. Though the woman standing before him bore a striking resemblance to his late wife, it was her familiar violet eyes that haunted him. . .while stirring his senses to an irresistible longing.

FOR A LADY OF VIRTUE

Miss Isabella Browning was both frightened and intrigued by her new employer. Rumors and scandalous tales about him were rife, but Isabella was drawn to Damien's tender concern for his children—and the temptation of his arms around her.

TO BECOME A MISTRESS OF DESIRE

Ignoring her escalating passion for Damien, Isabella threw herself into her work, trying to keep her two unruly charges out of mischief. Yet with each passing day, Isabella found herself succumbing to Damien's spell. But just as her trust grew, Lord Thomas Poole, Damien's brother-in-law arrived, determined to make Isabella his by exposing Damien's dark secrets. Soon the shocking truth about Damien's wife was revealed—a truth that could destroy their love, or prove that it could overcome anything. . .

Isabella wrenched a plain brown dress off its hook and flung it onto her bed. She swore vehemently and reached into the wardrobe for another gown. She yanked out the remaining three garments and cursed again. Then she pulled out her worn satchel from the bottom of the empty oak cabinet.

Growing up in an all-male household did have its advantages, Isabella decided, repeating a favorite curse of her eldest brother, the exact meaning of which she did not fully understand.

She kept her anger fueled by alternating her cursing and throwing, and within minutes all her clothing was scattered on the bed. After all her meager belongings were assembled, Isabella quickly gathered them up and stuffed them into the satchel.

Normally she would have carefully and methodically folded each and every garment before packing it, but Isabella was not about to take the time to pack neatly. It was imperative she vacate the house quickly, and neatness would be a deterrent to that goal.

Isabella embraced her anger, knowing it was buffering her from the true reality of her situation. If her anger left, it would be replaced by fear. Cold, unmitigated terror at the prospect of once again being without a job, without a home, without any security at all. And worst of all, the maniacal earl, the cause of all her recent distress, awaited her downstairs. Above all else he must be avoided.

Shuddering with emotion, Isabella jammed her straw bonnet on her head and hastily threw on her coat. She pulled too hard on a button and it went flying, but she did not take the time to search for it. Better to lose a button than lost a chance at escape.

You must hurry, you must hurry, Isabella repeated methodically to herself as she lifted her satchel. She paused briefly in the hallway outside her door, toying with the notion of saying good-bye to the children but rapidly discarded the notion. She could not afford to waste the time it would take to walk to the schoolroom at the opposite side of the house. Let the Brauns explain to her children why their governess had left so suddenly.

Quietly, efficiently, Isabella strode down the hallway to the servants' staircase. When she reached the first floor, she cautiously edged her way across the short hallway toward the kitchen at the back end of the house. She strongly suspected the earl had positioned himself at the bottom of the grand staircase in the front of the house, but if he moved to the side of the foyer, there was a slight chance he might see her at the back entrance.

Thankfully, Isabella reached the kitchen without incident. For once the busy room was deserted, excerpt for the cook, who was sitting in a large rocking chair in front of the fireplace, snoring softly.

Isabella could scarcely believe her good fortune. She had neither the time nor the desire to exchange lengthy farewells with the household's servants and now it appeared she would escape the house without anyone seeing her at all. Silently, she lifted the kitchen door handle and gingerly stepped outside into the small courtyard facing the rear of the house.

Isabella paused a moment, debating which direction to take. She would have preferred going straight ahead, walking through the Brauns' formal gardens, crossing the neighboring property, and emerging onto the street behind the Brauns' house. But a rather high fence divided the two properties and Isabella was uncertain she could scale it.

Instead, she turned to her right and rapidly walked along the shortest section of the house, crouching low to avoid being seen through any of the windows. Turning again, she followed the narrow brick footpath along the side of the mansion, heading toward the street front. She struggled for a moment with the iron latch on the fate guarding the entrance to the Brauns' yard but successfully swung it open on her third attempt.

Isabella was so started by the earl's voice that she dropped her satchel. Sher jerked her head around and saw him standing in front of the house only a few feet away. He was leaning casually against the brick façade, his arms crossed over his broad chest. He looked very pleased with himself.

Drat the man, must he be everywhere? Isabella bent down to retrieve her satchel and slowly stood upright. She simply stared at the earl for a few minutes, feeling completely lost. His superior attitude grated on her nerves. She gritted her teeth and considered a variety of actions. Isabella glanced briefly down at the earl's strong, muscular legs and knew for certain she could never outrun him. Perhaps it was possible to outwit him?

"Ahh, I can almost see the wheels turning in that devious head of yours, Emmeline." The earl pushed himself off the wall and took a step toward her.

Isabella decided it was time to take a stand against him. She thrust her chin in the air.

"I give you fair warning, sir. If you do not allow me past you, I shall scream. Very loudly."

"I see." The earl stroked his chin thoughtfully. He appeared singularly unimpressed by Isabella's threats. Desperately, she tried again.

"You are going to do precisely what I tell you to do, Emmeline."

"For the last time, I am not Emmeline!"

Isabella shrieked loudly, but the fight soon left her. She brought her hand to her hand and rubbed her temple vigorously. It was no use. No matter how many times she shouted the truth at this man, he would not relent. He would never relent. He would hound her until he got his way.

"What do you want from me?" she finally whispered.

Damien's eyes narrowed in suspicion as he observed her abrupt change of attitude. She had dropped her defiant stance and her eyes were lowered in classic feminine submission.

"Accompany me to your brother's house, Emmeline. I want to see his face when I confront him with you standing by my side."

"Even it if does not turn out as you anticipate? Do you promise, do you swear to me on your word of honor, you will leave me alone?"

"I have already state that I agree," Damien growled softly. "And I, unlike yourself, abide by my word."

"All right," Isabella sighed in defeat. "I will accompany you."

The earl gave a masculine grunt of satisfaction and moved forward to grave her arm. Isabella neatly sidestepped him and hurried toward the impressive carriage parked in front of the Brauns' house. She blinked resentfully at the coat of arms boldly emblazoned on the door of the shinning black vehicle. It reminded her of the carriage her grandfather rode in.

A young servant dressed in elegant blue and silvery livery eagerly jumped down from his position on the back of the coach when he saw them approaching. The servant respectfully opened the door, and against her better judgment, Isabella allowed him to assist her inside the coach.

She waited with a feeling of impending doom for the earl to join her. She could hear his deep voice outside the carriage as he gave his driver instructions, and she nervously adjusted the folds of her cloak on the cushions. Her heart began beating erratically at the thought of spending any length of time in such a close, confined space with the earl.

He entered the carriage all too soon, and to Isabella's dismay elected to sit by her side. The deeply padded cushions gave considerably beneath his weight, and Isabella found herself tilting precariously against the earl's leg. She let out a small yelp of surprise but managed to keep her balance with an effort and successfully avoided brushing against his strong, muscular thigh.

He glanced narrowly at her, and Isabella slid farther into her corner of the coach. Her body felt tense and awkward. She was aware of a growing sense of lightheadedness, and her throat felt a little dry.

He is trying to intimidate me with his superior physical size, she decided suddenly. She slanted him an assessing glance, but he appeared oblivious to her stares. The carriage jolted forward unexpectedly, and Isabella instinctively thrust her arm out to prevent herself from being thrown to the floor. After regaining her seat, she turned her head away from the earl and fervently prayed their trip would be a short one.

A case of mistaken identity, a presumed dead wife and an old family tale of fortune, all of these things are linked to the mystery of Lady Anne's Treasure. Isabella Browning is confronted by Damien St. Lawrence, the eighth Earl of Saunders, who adamantly claims she is his long lost wife, Emmeline. After going to the extreme of causing Isabella's dismissal as governess, Damien realizes too late that she is not his estranged wife. Now confronted with the guilt of causing her loss of employment, Damien takes Isabella up on her offer to be governess to his two children. Unlike his missing wife, Isabella seizes Damien's heart and the two embark on a passionate, heart-warming romance. When Emmeline's brother, Lord Poole, arrives tension mounts as he lays claim to Isabella. The search for Lady Anne's treasure unfolds the dark secrets of Emmeline's disappearance and family skeletons are revealed. This story comes to life with its vibrant setting descriptions, full-bodied characters and all engrossing plot. Adrienne Basso intricately weaves a mystical tale of intrigue and romance. His Wicked Embrace will capture your heart and leave you longing for more!—Caryn Simino—Copyright © 1999 Literary Times, Inc. All rights reserved—Literary Times