The Scottish highlands echo with legends of great battles, brave heroes—and, hidden deep in the swirling mists, creatures that belong to the night. In this sensual new collection, meet three vampires whose highland blood drums fierce and hot in their veins... 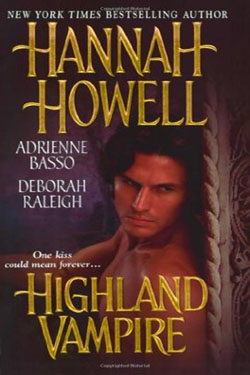 "Kiss of the Vampire," Hannah Howell

Seeking the truth of his tortured heritage at court, Jankyn McNachton finds something he never expected--true desire. Efrica Callan is beautiful, innocent, and possessed of a courageous heart. She spurns the men who court her dowry, but all Jankyn can offer this lovely creature of light is life in the darkness--and in his arms. . .

Suspecting her of murdering her husband, Callum, on their wedding night, Maev McCloskey's clan has banished her to a remote tower. There, she dreams of her dead love--and the passion they never knew in life. But soon she wonders if the seductive, mysterious Callum of her sleeping mind is real--and, if he is, whether joining him in his world would be an act of courage. . .or of madness. . .

"To Tame the Beast," Deborah Raleigh

In revenge for the curse that has forever banished him to the shadows, the creature called the Beast of MacDonnell demands the firstborn female child of each generation. Isobella's sister is soon to suffer this fate--unless Isobella can save her. Unafraid, she intends to confront the monster when she finds a strange man instead: a warrior with the face of an angel and mesmerizing silver eyes who tempts her like no other. . .

From: His Eternal Bride

He lifted his gaze up to her face. She was staring at him with sightless eyes. There was no fear reflected in their depths, yet no recognition either.

"Say my name," he whispered.

Her lashes fluttered and a look of pure agony crossed her beautiful face. "Callum. You are my Callum.

Every muscle in his body tightened and he began to shake. Her pain was almost a living entity. She thought him a ghost, a being of mist and imagination, but that was not true. From deep within the edges of his mind, a small voice urged him to continue, to take what she offered, what he so desperately needed.

But he couldn't. So much had already been taken from her. He rolled away, landing on his back beside her. He angled an arm over his eyes, sick with shame.

How could he corrupt the last decent, pure, beautiful thing from his former life? How could he use her trust and her love to try to escape the living hell his existence had become? Had he truly sunk to such a decadent level?

He felt her move. "Callum?" Her trembling body pressed against his side; her slender arm moved over his chest. She ran her fingers lightly over his muscles, then snuggled her face against the hollow of his shoulder. The hardened tips of her nipples branded his skin like burning embers. "I know ye're not real, yet ye feel solid and warm and alive. I can even hear yer heart beating." She let out a small, startled laugh. "The madness is overtaking me now, but I no longer fear it. Nay, I welcome it, because it brings ye to me.

Callum squeezed his eyes closed. His body screamed with wanting her, her silken softness beckoned him, but he controlled himself. He had to tell her the truth. All of it. There was no other choice. And when she learned what had happened, what he had become, he could only pray that she would turn to him instead of running away.