"Well-developed characters and a strong sense of time and place are just a few of the pluses readers will encounter in Basso's latest smartly written medieval romance."—Booklist Reviews 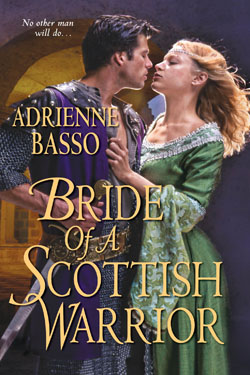 Newly knighted Sir Ewan Gilroy needs a dowry and a wife, in that order. Though the widowed Lady Grace plans to enter a convent, squandering so much lush beauty—and such a fortune—would surely be its own sin. Grace will not be easily wooed, despite her family's urging and Ewan's famed charm. She challenges him as no woman ever dared, proving his equal in spirit and in passions. . .

To atone for her past, Grace vows to never remarry—least of all a brash and reckless warrior. Yet whether defending her honor or stoking desires she hardly knew she possessed, Ewan is a man beyond compare. And as their fragile trust is threatened by treachery, Grace must decide whether to reach for the happiness within her grasp—and fight for the love of her bold Highlander. . .

Grace arrived at the hall, but halted the moment she saw a young page struggling to carry in a laden tray that was almost twice his size.

"Let me help, Connor," she said, reaching for the full pitcher of ale before it tumbled to the ground.

"Oh, thank ye, milady." Connor grinned, straightened the now lighter tray, and hurried to the dais. Grace followed slowly, squinting at the two seated men. One was her brother-- – the other unknown to her. Yet she knew by the tingling feeling climbing up her spine that the stranger was watching her.

She ventured closer, keeping her eyes trained on the edge of the table. When she reached the dais she had no choice but to look up. Her brother’s scowled immediately turned to an overly bright grin. Grace’s stomach tightened with suspicion.

"Grace, there’s someone I’d like ye to meet," Brian bellowed. "Sir Ewan Gilroy has come to pay us a visit."

Dressed in a well-made green tunic and leather trews, Brian’s guest sat with one ankle crossed casually over the other knee, as relaxed as he might have been in his own hall. He came to his feet and stepped close when they were introduced, an imposing warrior of solid muscle and brawn.

With slightly trembling hands, Grace placed the pitcher of ale on the table. Standing so close meant she had to tip her head back to meet Sir Ewan’s gaze. He was tall and broad- shouldered, a dark-haired man, with piercing blue eyes, a wide mouth, and a square jaw.

"’Tis an honor to meet such a fair and lovely lady."

Uncertain how to respond to such a flirtatious compliment, Grace simply curtsied. She supposed Sir Ewan was trying to be polite, but then she noticed that he was staring at her intently, in a way that no man ever had.

It made her nervous.

Grace smoothed a hand over the top of her wrinkled skirt and wondered what he saw when he looked at her. Nothing extraordinary, to be sure. Her petite frame lent itself to a younger appearance, but her face possessed the maturity of her years. Her auburn hair, said by many to be her best feature, was plaited and pinned to her head, and covered with a veil. Her gown was plain, serviceable, and loose fitting, just as she preferred.

Yet for some unexplained reason, Sir Ewan seemed to find her fascinating. His gaze drifted from her face to her breasts to her hips to her feet. Grace’s breath quickened and her heart thumped wildly against her rib cage. ’Tis a delayed reaction, she told herself sternly. I’m merely relieved it’s not Roderick, come to make trouble.

She forced herself to relax. She was perfectly safe, here in McKenna hall, with her brother at her side. The realization bolstered her courage. She took a step closer.

The spicy, masculine scent of leather surrounded her. Grace inhaled slowly, allowing it to linger in her nostrils. It was pleasant, oddly comforting, and unsettling all in the same moment.

She could tell by the rising heat in her cheeks that her face was flushed. Embarrassed by this reaction, she shifted on her feet, feeling utterly foolish for having such a girlish reaction to a handsome stranger.

And then Sir Ewan did the most amazing thing. He smiled. If she thought him handsome before, he was heart-stopping now. That smile brought a twinkle of mischief to his eyes and revealed a dimple in his unshaven cheek. For just a moment, receiving that mesmerizing smile did funny things to her stomach and knees, but Grace soon pulled herself back to reality.

Ewan Gilroy possessed the dangerous, manly good looks that left women stumbling on their feet. Probably since he was old enough to shave off his whiskers. Oh, yes, there was no doubt that Sir Ewan was the kind of man who delighted in tempting women with his handsome face and promising smile, but she was immune.

Or so she told herself.

"What brings ye to the Highlands, Sir Ewan?"

"A quest, milady. That might have just come to a very satisfactory end." He took a step closer and she swore she could see the remnants of his smile lurking in his eyes. "That is, if ye look kindly upon me."

"Aye. Shall I tell ye the details?"

Grace shivered. His voice was deep and rich, an intoxicating sound she could listen to for hours. A vision of herself sitting at his feet, her head resting on his knee as he regaled her with tales, invaded her mind.

Shaking herself out of that ridiculous stupor, Grace looked beyond Sir Ewan to her brother. "How long will yer friend be visiting with us?"

Her brother’s eyes narrowed with caution. He paused, almost as if weighing the words in his mind before speaking. "Ewan has journeyed here fer more than a visit."

"Oh?" Grace struggled to remain calm, but she felt her distress start to bubble to the surface.

"Aye. A most important reason has brought him to us." Brian cleared his throat loudly. "Ewan is in search of a bride. And I’ve suggested that ye would do nicely."

"Well-developed characters and a strong sense of time and place are just a few of the pluses readers will encounter in Basso’s latest smartly written medieval romance."—Booklist

"This extremely moving story, in which the entrancing, honorable characters grow throughout the tale, will captivate readers. Bride of a Scottish Warrior is an impossible-to-put-down read!"—RT Book Reviews, 4.5 Stars

"Bride of a Scottish Warrior was full of amazing characters, a lush world that'll sweep you into the past, heartache and healing, loss and love and true romance winning the day. Definitely one to check out if you love highlanders and incredible romances."—Herding Cats and Burning Soup

"This was such a wonderful story...I enjoyed every single page. Heartwarming till the end!!"—Addicted to Romance, 5 Blossoms