"Basso charms with an unconventional heroine and dashing hero who jump into a scandal. Readers will care about the protagonists, but the secondary characters shine as they lure readers into a lively and touching love story." —Romantic Times Magazine 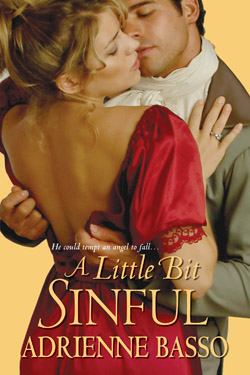 Eleanor Collins knows that her beautiful younger sister will have wealthy, powerful men falling at her feet in her first London season. But Eleanor is surprised to discover that one man's attentions are utterly focused on her.

As delicious as Sebastian Dodd, Viscount Benton, finds the eldest Collins daughter, his true motive is darker than mere seduction. Until he has avenged his mother's death, he will be unable to think of anything else. Or so he believes, until he takes his first taste of Eleanor's inviting lips, and finds his mind—and his body—utterly consumed. . .

Spying a splendid rose arbor, Eleanor walked away from the crowd. When she reached the arbor, the heady fragrance engulfed her, along with an odd sense of peace. Though she had never been in this particular garden before, the familiar, welcome scent of the roses provided the serenity she craved.

Her solitude, however, was short–lived. Within minutes she heard the steady crunch of footfalls approaching. Glancing over her shoulder she was more than surprised to see Viscount Benton striding along the shell-strewn path, his eyes fixed steadily on her.

"Lady Eleanor! I am delighted to see you again." He took her hand, his strong fingers wrapping possessively around hers. With a devilish smile he lifted it, pressing his lips suggestively against her wrist, somehow finding the small section not covered by her glove. "The hour was growing so late I feared you might not make an appearance."

A coy woman would have blushed and stammered and cast him a demure smile. Instead, Eleanor's mouth gaped open in surprise. "Me? You were waiting to see me?"

Who else indeed? Eleanor could not believe he was being sincere. She studied him closely, but his gray eyes were unreadable. "Why are you so eager to see me, my lord? Are you angry at my interference between you and my sister, perchance?" Eleanor asked, hitting upon what she believed the only logical explanation.

"Do I look angry, Lady Eleanor?"

Heavens, no. He looked divine. His navy breeches hugged his muscular thighs in a most provocative manner, the matching jacket stretched the breath of his wide shoulders. On another man the outfit would have appeared somber, almost dour, but Lord Benton had such a strong sense of style he easily carried it off.

"It would be understandable if you did hold some resentment toward me," she continued, still convinced he must be annoyed with her. Bianca was a beautiful woman. Any man would be upset to have lost her.

"I hate to disillusion you, ma'am, but your objections had no influence on my actions." His head dipped closer to hers, then his eyelids dropped a fraction over his eyes, giving him an almost dangerous appearance. "When I set my mind toward getting something I truly want, nothing, and I do mean nothing, stands in my way."

Eleanor had difficulty looking away. She forced her breath to come at a more even pace, willed her erratic heartbeat to slow. She had no doubt he spoke the truth about getting what he wanted and for one wild moment the intensity in his eyes seemed to say he wanted her.

It was ridiculous, of course. Laughable, really. Eleanor shook off her outrageous assumptions, convinced she was mistaken. Or wistful? Abruptly she pulled away. "If it was not my doing, then what caused such a sudden change in your attitude? Previously you were quite deliberate in your pursuit of Bianca."

"Yes, initially." The color in his eyes intensified.

"And then?" she prompted.

I noticed you. The words were not spoken. She believed she read them in his gaze, then instantly chastised herself for being a fool. Those sentiments were in her head, or rather buried deep inside herself, in a long-forgotten place where loneliness dwelled.

"I am significantly older than your sister," he said. "Even you remarked upon it."

"I might have briefly mentioned the differences in your ages," Eleanor acknowledged.

"You spoke of me as if I were practically in my dotage, my right foot poised above the grave."

"I never said such a thing."

"You implied it, but I am gentleman and therefore refuse to call a lady a liar. However, the age difference was but one of the obstacles. After spending time with Bianca I quickly realized that though delightful, she is a girl. And I very much prefer a woman." He smiled fully at her. "I assume your sister suffered no permanent distress from the encounter?"

Eleanor's nostrils flared. "Are you certain? Perhaps after spending time with you, Bianca is ruined for all other men."

"Ruined?" He gave her a startled, strange look. "Neither one of us believe that, Lady Eleanor."

"Hmm." Her nostrils flared again and she stared at him reproachfully.

"What exactly does that stare mean? Are you now saying that you approve of a romance between me and your sister? Honestly, Lady Eleanor, you need to make up your mind. 'Tis no wonder women are lauded as fickle creatures when even a sensible one such as yourself behaves so irrationally."

Sensible? Had he just called her sensible? "Of course I don't approve of a match between you and my sister."

"Splendid, then we are in agreement." Lowering his head, Lord Benton gave her a wicked grin. "Shall we stroll through the trees? The path is well marked and shaded in several areas."

Eleanor blinked rapidly. His mercurial moods were keeping her off–balance. If she didn't know better, she would have sworn he was flirting with her. Which was completely absurd.

Sebastian Dodd, Viscount Benton, will have his revenge against the Earl of Hetfield. The only difficulty is finding the right means of exacting retribution. So far, Sebastian’s attempts to force Hetfield into a duel have been utter failures. Now, Sebastian is uncertain as to what his next move will be until he discovers that Hetfield is in London with his two daughters: Eleanor and Bianca Collins. Once Sebastian learns that Hetfield plans on launching Bianca into society, he realizes he has the perfect means of destroying his enemy. All Sebastian has to do is successfully woo and then ruin Bianca, and he will finally settle an old score. The only problem is that despite his best efforts to win over Bianca, Sebastian finds himself distracted by the completely irresistible Eleanor. Basso expertly combines subtly nuanced characters with an impeccably crafted Regency setting and a revenge-fueled plot deftly laced with danger and desire.—John Charles, Booklist